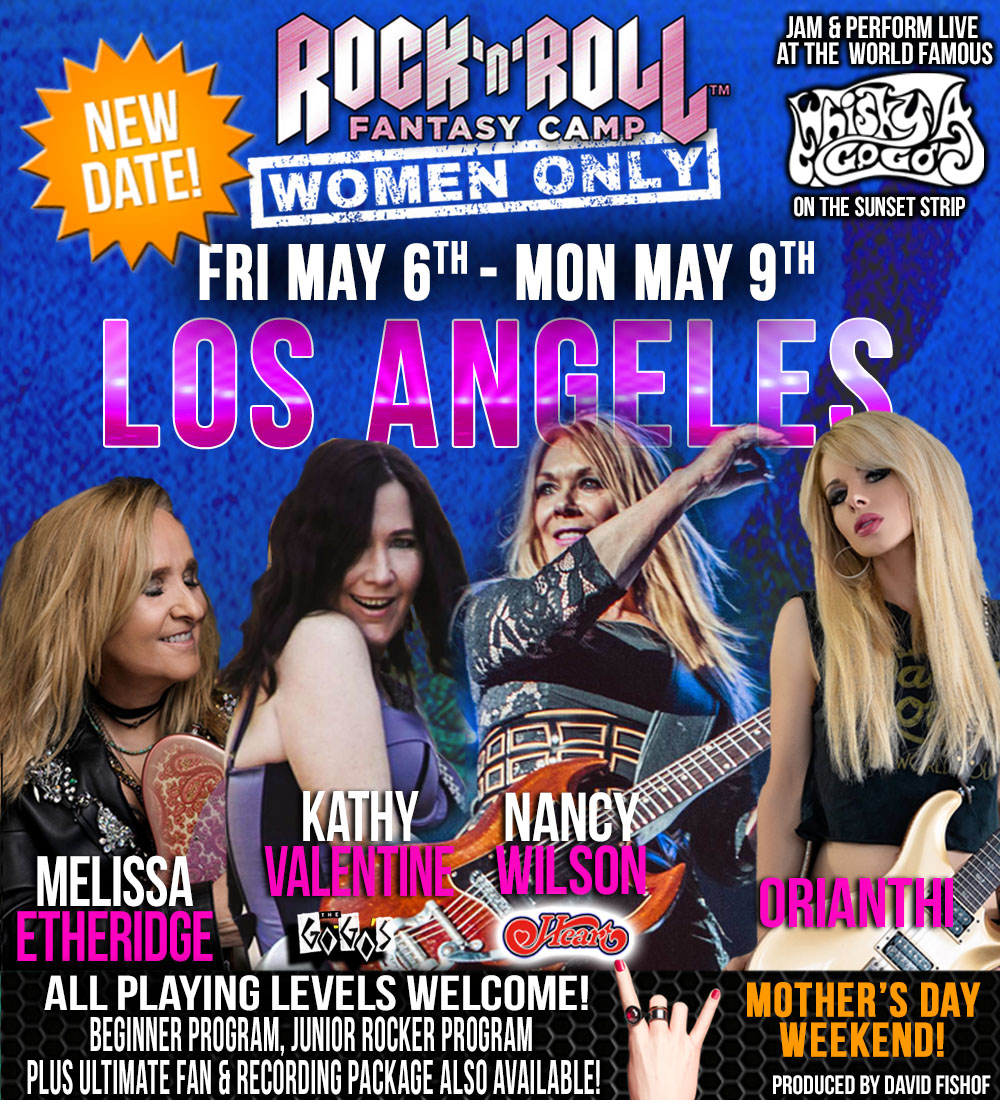 ROCK 'N' ROLL FANTASY CAMP IS PROUD AND HONORED TO PRESENT NANCY WILSON OF HEART, KATHY VALENTINE OF THE THE GO-GOS, MELISSA ETHERIDGE, ORIANTHI AND MORE!

Our Women's Only Camp is a safe, non-competitive environment for women of all ages to take their skills and confidence to the next level, realize their dreams are possible, and create bonds and friendships for life with fellow aspiring musicians. "Camp becomes an emotional and life changing experience for both campers and rockstars, as you witness transformations in people both musically and emotionally", says counselor Britt Lightning. As Roger Daltrey says of Camp, "It's an amazing experience and it makes you remember where you came from."

Nancy Wilson of Heart will also be a special guest headliner at this camp. Jam with her on Heart's greatest hits, such as "Crazy On You", "Magic Man" or "Barracuda" at the private Rock and Roll Fantasy Camp facility in L.A.!

Rock & Roll Hall of Fame inductees Ann and Nancy Wilson first showed the world that women can rock when their band, Heart, stormed the charts in the '70's ! Not only did the Wilson sisters lead the band, they wrote the songs and played the instruments too, making them the first women in rock to do so. Heart continued topping the charts through the '80's and '90's with huge hits like "These Dreams," "Alone," "What About Love," "If Looks Could Kill," "Never," and a string of other hits that showcased the sisters' enormous talents as musicians, singers and songwriters.

From 4 Grammy Nominations, a Lifetime Achievement Award from the Grammy Foundation, to the Hollywood Walk of Fame and the unforgettable Kennedy Center Tribute to Led Zeppelin, Heart is one of the most recognized and awarded rock and roll bands of all time.

Kathy Valentine has been a working musician and songwriter for over 40 years, ever since she started her first band at age 16 in her hometown of Austin, Texas. After moving to Los Angeles, Kathy joined a band that would go on to make music history: The Go-Go’s. In this group, Kathy wrote or co-wrote some of the bands most renowned tunes, including the hits “Vacation” and “Head Over Heels.” She returned to Austin in 2006 and began finding new creative pursuits and career opportunities as a public speaker, spokesperson, producer, actor and author.

Signing with the esteemed University of Texas Press, her memoir “All I Ever Wanted” was released in Spring, 2020. A soundtrack of original music accompanies the book. The last few years also featured Kathy’s acting debut in “The Transcendents” and several of her songs in the Broadway musical based on the Go-Go’s catalog ‘Head Over Heels,” currently in regional productions across the country. She put an academic degree plan on hold while finishing and promoting her book, and still finds time to play guitar with the Bluebonnets the all-female rocknroll band she started in Austin.

Melissa Etheridge is one of rock music’s great female icons. Her critically acclaimed eponymous debut album was certified double platinum. Etheridge’s popularity built around such memorable songs as “Bring Me Some Water,” “No Souvenirs” and “Ain’t It Heavy” for which she won her first Grammy for Best Female Rock Vocal. Etheridge hit her commercial and artistic stride with her fourth album, Yes I Am, featuring the massive hits “I’m the Only One” and “Come to My Window,” a searing song of longing that brought her a second Grammy. The six times platinum album spent more than two and a half years on the album chart. Etheridge is also an Oscar winner for Best Original Song in 2007. In 2011 Melissa made her Broadway debut as St. Jimmy in Green Day’s rock opera, American Idiot, where she replaced Billie Joe Armstrong for one week, and received a star on the Hollywood Walk of Fame. Etheridge is scheduled to release MEmphis Rock and Soul, a new album honoring Stax Records, in fall of 2016. She recently completed recording at Royal Studios in Memphis on what will be her first album since 2014’s critically lauded This Is M.E.

At the tender age of 6, Orianthi had a moment of clarity. Picking up a guitar, she remembers knowing “from that moment on that it would take me on a journey, and I wanted to keep on learning. And I’ve never stopped.” That journey took the ambitious young guitarist/singer/ songwriter from her native Australia to Los Angeles, her current home. It also found Orianthi, then only in her early 20s, hand-picked by Michael Jackson for his band; mentored by Carlos Santana (who invited the teenager to play on stage with him right after meeting her at his soundcheck!); playing the 2009 Grammy’s with Carrie Underwood; as the first female guitarist in Alice Cooper’s band, and collaborating with Richie Sambora for the pair’s 2018 album Radio Free America For starters.Now, 2020 sees the culmination of all that experience in a new chapter, with Orianthi’s stunning 11-song album O, produced by Marti Frederiksen (Aerosmith, Faith Hill, Ozzy Osbourne). Written and recorded at Frederiksen’s Nashville studio in a mere 28 days, O songs build on Orianthi’s bluesy guitar influences and roots (from B.B. King to Cream... to Nine Inch Nails!) and find her incorporating pop and rock elements that make for a fully realized, timeless rock album. 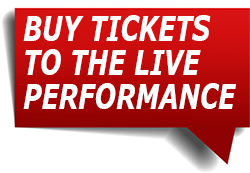 GET YOUR TICKETS TO THE SHOW AT "THE WHISKEY" BEFORE THEY SELL OUT!

The Recording Package includes a full day session at a Professional Recording Studio with a Professional Producer. An extra bonus included in the Recording Package is special guest Lynne Earls! Lynne Earls is an Irish music producer, songwriter and sound engineer based in Los Angeles, CA. In addition to owning her own label, custom music production shop (EMP Music) and recording studio (EMP Studios) in Los Angeles CA) she also produces and engineers regularly at studios across LA including Capitol, The Village, Henson, East West, Paramount, Glenwood Place & The Record Plant. With both old school and modern production and engineering skills, Lynne is a natural hybrid between organic live tracking in traditional studios and modern laptop based production which brings a whole new dimension and range of colors to play with. Her overall approach to making records is to stay as close to the essence of an idea and not overwork or craft things too much, losing the original magic! Currently serving a Governor on the LA Chapter Board of the Recording Academy 21/22, co-chair of the LA Chapter Producer & Engineer Wing Commitee 21/22 as well as 19/20, was Vice President of the LA Chapter Board 20/21, as well as a Governor on the La Chapter Board 18/20. She is an active member, mentor and on the creative board for She Is The Music, and an Ambassador for Imogen Heap’s Creative Passport community.

We will be offering several masterclasses by our many Rock Star mentors a few months in advance on ZOOM that you can register for and attend that will give lessons on the music of the guest stars. These classes will be hosted by Britt Lightning, our Rock Camp Head Counselor and the rockstar mentors. These classes will be between 60-90 minutes and you will be able to talk live to the rockers . Britt has hosted over 160 masterclasses this past year. The cost for these will be $50 and you will be sent a list of the schedule. In addition you and your band will be able to Zoom with your rock star mentor 7-10 days in advance to discuss the songs you want to focus on to play with the guest star and songs for your live performance and maybe introduce some new songs.

DON’T MISS OUT on this ONCE IN A LIFETIME EXPERIENCE – THIS WILL SELLOUT! Contact ROCK CAMP SALES DEPT. NOW to reserve your spot at (888) 762- 2263, or [email protected]