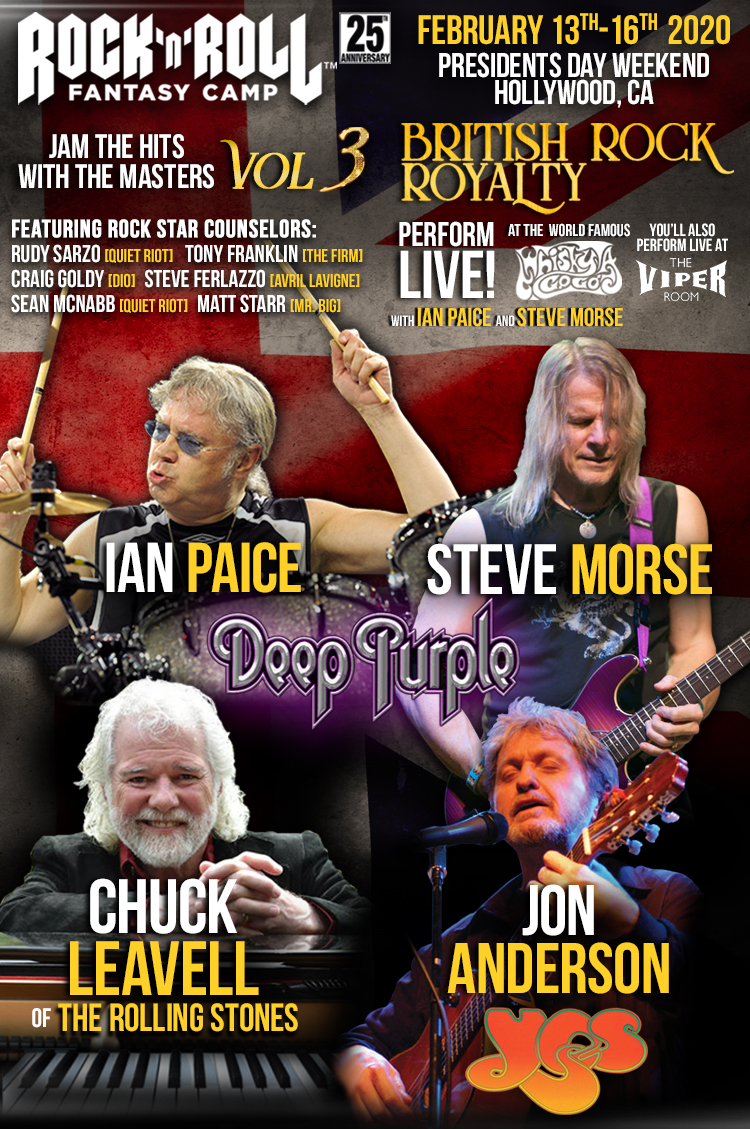 You will jam with ALL of these amazing musicians at the private Rock and Roll Fantasy Camp facility- Imagine YOU on stage jamming your favorite Rolling Stones songs with the keyboard player who shares the stage with Mick and Keith every night or joining Jon Anderson on stage for ROUNDABOUT! PLUS perform live at the legendary Whisky A Go Go with Ian Paice and Steve Morse of Deep Purple and your camper band for the Rock and Roll Fantasy Camp finale!

Immerse yourself in the music of true British rock royalty! 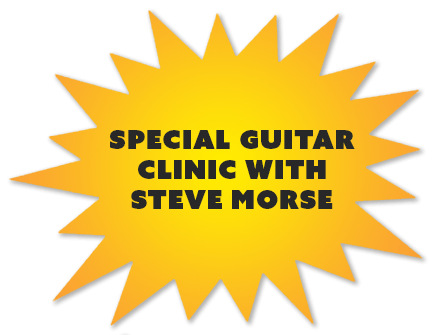 "I'm going to tell you how to:
•Improve your phrasing
•Improve your sound
•Get yourself heard in the live mix
•Answer your questions and more"
- Steve Morse

Over the course of this camp you will have the opportunity to jam some of your favorite British rock hits such as:

This is NOT a competition, It's not a reality show. It's simply "reality".


It's YOU... face to face, with the rock stars that have created the soundtrack of your life...and YOU get to play with THEM! ALL SKILL LEVELS WELCOME!

Deep Purple are considered to be among the pioneers of heavy metal and modern hard rock, although their musical approach changed over the years. Originally formed as a progressive rock band, the band shifted to a heavier sound in 1970.Deep Purple, together with Led Zeppelin and Black Sabbath, have been referred to as the "unholy trinity of British hard rock and heavy metal in the early to mid-seventies". They were listed in the 1975 Guinness Book of World Records as "the globe's loudest band" for a 1972 concert at London's Rainbow Theatre and have sold over 100 million copies of their albums worldwide.

Deep Purple were ranked number 22 on VH1's Greatest Artists of Hard Rock program and a poll on British radio station Planet Rock ranked them 5th among the "most influential bands ever". The band received the Legend Award at the 2008 World Music Awards. Deep Purple were inducted into the Rock and Roll Hall of Fame in 2016.

Yes are one of the most successful, influential, and longest-lasting progressive rock bands. They have sold 13.5 million RIAA-certified albums in the US. In 1985, they won a Grammy Award for Best Rock Instrumental Performance with "Cinema", and received five Grammy nominations between 1985 and 1992. They were ranked No. 94 on VH1's 100 Greatest Artists of Hard Rock. Their discography spans 21 studio albums. In April 2017, Yes were inducted into the Rock and Roll Hall of Fame.

Chuck Leavell has served as the principal touring keyboardist and de facto musical director of The Rolling Stones since 1982. As a session musician, Leavell has performed on every Rolling Stones studio album released during his tenure with the exception of Bridges to Babylon (1997). He has also toured and recorded with Eric Clapton, George Harrison, David Gilmour, Gov't Mule and John Mayer and was a member of the Allman Brothers Band throughout their commercial zenith in the 1970s.

You will jam with ALL of these amazing musicians at the private Rock and Roll Fantasy Camp facility- Imagine YOU on stage jamming your favorite Rolling Stones songs with the keyboard player who shares the stage with Mick and Keith every night.

Or imagine joining Jon Anderson on stage for ROUNDABOUT!

PLUS perform live with your camper band at the legendary Whisky A Go Go with Ian Paice and Steve Morse in Hollywood California!

This camp, filled with these legendary artists along with our rock star counselors such as Tony Franklin (The Firm), Rudy Sarzo (Quiet Riot), and Craig Goldy (Dio) will be a once in a lifetime opportunity for you to immerse yourself into rock and roll for four music filled days.

This camp, filled with these legendary artists along with our rock star counselors, will be a once in a lifetime opportunity for you to immerse yourself into rock and roll for four music filled days.

Don't get left out!

SIGN UP NOW AS WE WELCOME MUSICIANS OF ALL LEVELS IN OUR NONCOMPETITIVE ENVIRONMENT.

There will be Q&A’s with our headliner and rock star counselors, parties, catering, your road crew and so much more! In the upcoming days you will jam live on-stage with IAN PAICE and STEVE MORSE of DEEP PURPLE, JON ANDERSON of YES, and CHUCK LEAVELL of THE ROLLING STONES, take photos, and your memorabilia signed by them as well. Plus, your band will perform live at the legendary Whisky A Go Go in Hollywood, CA!

The Recording Package includes a full day session at a Professional Recording Studio with a Professional Producer. An extra bonus included in the Recording Package is special guest Bob Marlette! Bob started out as a session musician and was then offered the keyboard player position for Al Stewart's band and toured the world on the strength of his massive singles, "Year of the Cat" and "Time Passages". When he returned he became a session player/song writer, which led him to work Tracy Chapman, Laura Branigan, Wilson Phillips, Rick Springfield, Sheryl Crow and many others. In the late 80's he worked with Gregg Rolie from Journey which introduced him to Neal Schon enabling him to produce his solo record "Late Night". After this period he had the privilege of working with an 18 yr old John 5 via his band "Red Square Black". This seems to be the launching pad for his eventual immersion into rock. Suddenly Rob Halford and Black Sabbath are calling him to produce their records. He has been able to create a style and approach that worked for many of the staples of modern rock- Alice Cooper, Marylyn Manson, Tony Iommi/Glenn Hughes, Saliva, Seether, Shinedown, Filter, Rob Zombie, Airborne, Anvil, Blackstone Cherry and many many others.