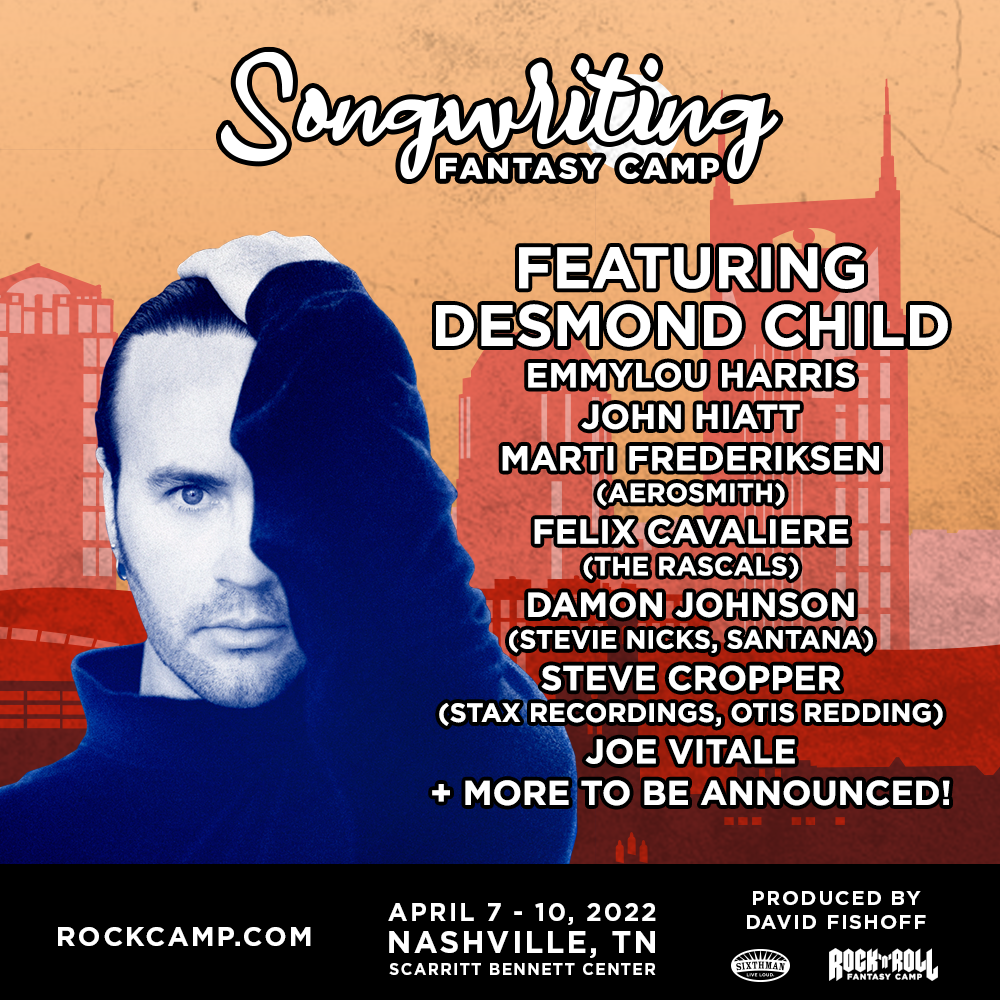 Desmond Child & Friends is a one-of-a-kind fantasy camp experience for songwriters from all backgrounds! Whether you write country, pop, rock, americana, latin, jazz- we guarantee you will come out of this camp as a better songwriter. In addition to working with an incredible selection of talent hand-picked by hitmaker Desmond Child, you will learn songwriting from the best of the best, the people that have achieved greatness in the art of songwriting. This is a four day fully immersive experience where you will write, co-write with fellow campers, and get your material critiqued and assisted by the best. This is a bucket-list opportunity that you won’t want to miss. 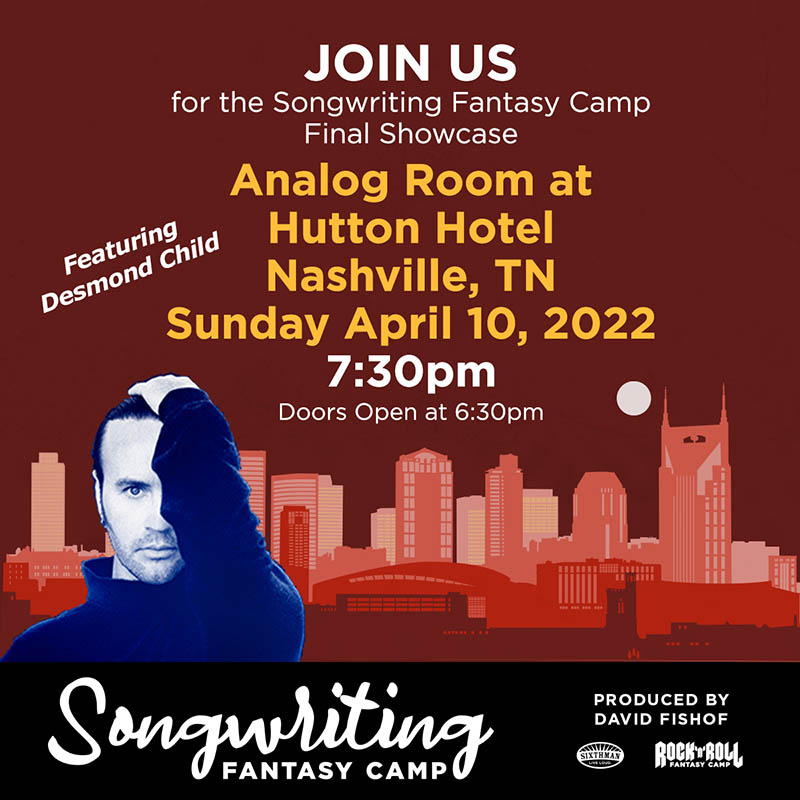 During this camp, you will come prepared with your own original songs and learn how to write in the special format Desmond uses to pen all of his hits. In addition to revising your own original material, you will be given prompts by Desmond Child himself (i.e rock anthems, J-Lo style Diva tracks, modern hits, etc.) and carry out these assignments.

When you’re not learning from Desmond, you’ll spend your days getting advice and learning tips and techniques of the trade from the songwriting industry’s best! From classes on The Business of Songwriting to roundtable workshops on your own material, there is no doubt that you will walk away not only a much better songwriter, but with a much better understanding of the business as well.

A major skill in the art of songwriting is the ability to co-write with other songwriters. This camp will provide you the opportunity to write with fellow campers in intensive sessions alongside up-and-coming stars seen on American Idol and The Voice! Your goal in these workshops will be to write for the artist, and to create something they will proudly take with them into their next studio session.

On the last night of camp, we are hosting the biggest night in Nashville: the Songwriter Showcase at ANALOG, where you will be performing your original music for A&R representatives, music industry executives, and more! Everybody who is anybody will be at the showcase and listening to your songs. It is guaranteed to be a night to remember!

The Key to Writing Lyrics Before Music:
This class discusses how to best prepare your lyrics for music, and where to start in that process. You will bring lyrics in the format given to you by Desmond at the beginning of camp for a workshop and lesson in writing and revising lyrics before the accompanying composition is involved.

The Key to Writing Music Before Lyrics:
Come prepared with music you've been working on! This class will discuss how to start a song by writing music first, and lyrics second. You will learn how to fit lyrics to an already finished composition, and make sure your piece is ready for lyrics before jumping the shark too quickly!

Co-Writing:
Learn what it takes to make a good co-writing team. This class will cover everything from the business from the artists’ perspectives to writing lyrics to fit someone else’s music and vice versa.

Breaking Down The Hits:
Join a panel of hit songwriters as they take you through the processes, stories behind, and secrets to writing their most popular songs.

Creative Writing and Literature:
Study the writings of some of the best writers and poets and learn to unlock your personal stories, poetry and ideas into verse.

Melody and Harmony:
How to create the most emotive and effective melodies and learn the role of harmony and how it complements the melody.

Writing for Other Artists:
This class covers the dos and don’ts when it comes to songwriting for other artists or bands. You will learn how to properly research, prepare, and ultimately sell the song when it comes time to sit down with the artist you’re writing for.

Writing as a Singer-Songwriter:
It's common to hit a block when writing music for yourself to perform. This is why writing as a singer-songwriter can be harder than writing for other artists. This class will cover how to get past that block and assure that you're writing a song that will speak to the masses, and not just yourself!

Film and Television Songwriting:
Taught by a professional songwriter who has written the soundtracks to some of your favorite TV shows and movies, learn what the film and TV industries are looking for in their songwriters.

Demo Production:
Learn tips on producing and recording professional demos of your songs.

Songwriting from Scratch:
Explore songwriting from scratch by looking into general song form, melody, lyrics, chord progressions, and elements of rhythm in this class for beginners.

The Business of Songwriting:
Led by one of the songwriting industry’s top attorneys, you will learn the do’s and don'ts when it comes to co-writing, splitting royalties, finding representation, and more.

Marketing Yourself as a Songwriter:
In today’s day in age, a songwriter can’t just rely on their songs to sell themselves. Learn from a top music business executive how to stand out and get the attention of the industry by marketing yourself as a songwriter.

Arranging Instruments in Songwriting:
Learn songwriting from the perspective of guitar players, vocalists, bass players, drummers, keyboardists and percussion and how to best complement songs with these instruments.

About DESMOND CHILD
Grammy winning and Emmy nominated songwriter-producer Desmond Child is one of music’s most prolific and accomplished hitmakers. He’s a film, television, theater and music producer, recording artist, performer, and author. His credits appear on more than eighty Billboard Top 40 singles spanning six decades, including “Livin’ On A Prayer,” “You Give Love A Bad Name,” “I Was Made For Lovin’ You,” “Dude Looks Like A Lady,” “How Can We Be Lovers If We Can’t Be Friends,” “I Hate Myself For Loving You,” “Livin’ La Vida Loca,” “The Cup Of Life,” “Waking Up In Vegas” and many more.

Desmond Child was inducted into the Songwriters Hall of Fame in 2008 and serves on its Board of Directors as well as the Board of ASCAP. In 2018 he received ASCAP’s prestigious Founders Award celebrating 40 years as a proud member of ASCAP. He also co-founded the Latin Songwriters Hall Of Fame where he serves as Chairman Emeritus.

About Emmylou Harris
Fourteen-time Grammy award winner Emmylou Harris is one of music’s most revered songwriters and performers, with a lyrical style that is eloquent, honest, and straightforward. As a singer, songwriter, and musician, Emmylou has released 26 studio albums, 11 compilation albums, four live albums, three video albums, and 70 singles. Fifteen of Emmylou’s singles have hit number 1 on the Billboard Hot Country charts in the U.S. and the RPM Top Country charts in Canada. Emmylou has collaborated with Willie Nelson, Dolly Parton, Linda Ronstadt, Garth Brooks, and George Jones, among many others. Awards Emmylou has won include three Country Music Association awards, two Academy of Country Music awards, four Americana Music Association awards, one Satellite award, among several other honors. Emmylou became a member of the Grand Ole Opry in 1992, was inducted into the Country Music Hall of Fame in 2008, and was presented with the Grammy Lifetime Achievement Award in 2018.

About Marti Frederiksen
Marti Frederiksen is an L.A.-based songwriter, producer, and musician who has been involved in penning numerous hits and is perhaps best known for lending his vocal talent to the soundtrack of Almost Famous as the singer of the fictional band “Stillwater.” Having worked with Virgin Records, Geffen, ATCO, and Sony, Marti is a songwriting star. A co-writer on several Aerosmith songs, including four songs on their 1997 Nine Lives album and ten songs on Just Push Play, Marti also co-wrote and produced the song “(It) Feels So Good” from Steven Tyler’s solo project, which hit number 35 on the Billboard Hot 100. With additional credits as a writer for Def Leppard, Mötley Crüe, Mick Jagger, Ozzy Osbourne, and Gavin Rossdale, among others, Marti is well-versed in writing rock hits. Marti has also written for other genres, working with artists like Carrie Underwood and Sheryl Crow. A producer at heart, Marti is also accomplished in the studio, mixing Guitar Hero versions of Aersomith and Metallica songs and producing Faith Hill’s “Cry,” which won a Grammy.

About Steve Cropper
Steve Cropper is a two-time Grammy award winning guitarist, songwriter, engineer, and producer who is ranked #39 on Rolling Stone Magazine’s list of 100 greatest guitarists of all time. A founding member of the influential Stax Records house band, Booker T. and the M.G.’s, Steve performed on Sam & Dave’s “Soul Man” and co-wrote and played on “(Sittin’ On) The Dock Of The Bay” with Otis Redding. Additional songs co-written by Steve are Eddie Floyd’s “Knock On Wood,” Wilson Pickett’s “In The Midnight Hour,” and Steve has worked with other culturally significant musicians such as Rod Stewart, Paul Simon, Ringo Starr, John Lennon, and The Jeff Beck Group. Steve has been inducted into both the Songwriters Hall of Fame in 2005 and the Nashville Songwriters Hall of Fame in 2010, and. Booker T. and the M.G.’s has been a part of the Rock and Roll Hall of Fame since 1992.

About Felix Cavaliere
Felix Cavaliere was trained in classical piano from the age of six. He formed his first band called The Stereos while in his teens which is when he started to perfect his vocal abilities. He left Syracuse University after only two years in order to pursue a career in music. He moved to New York City and got his professional start as a backup musician for Sandy Scott and later Joey Dee and the Starlighters. In 1965, he formed the group "Young Rascals," whose high-energy performances attracted Sid Bernstein and got them signed with Atlantic Records. Throughout the 70's Felix went on to a solo career and released five albums. In 1997, Felix along with his former Rascals band members were inducted into the Rock & Roll Hall of Fame. Felix has three daughters and still travels the country, performing almost every weekend.

About Damon Johnson
Damon Johnson, currently a solo artist and former member of Thin Lizzy, gained national notoriety as a founding member of the band Brother Cane, with three #1 singles on rock radio (“Got No Shame,” “And Fools Shine On,” and “I Lie In The Bed I Make”). Brother Cane toured as both a headliner and as a supporting act for Van Halen, Aerosmith, Robert Plant, Lynyrd Skynyrd, and Candlebox. Damon was a writer and guitar player on Sammy Hagar’s Marching To Mars album, and has also played lead guitar for Alice Cooper. Damon co-wrote the lead single of Stevie Nicks’ solo album, Trouble in Shangri-La (“Every Day”), and has helped pen several songs for Ted Nugent, Skid Row, Santana, and Queensrÿche. Most recently, Damon has been touring with Lynyrd Skynyrd as a guitarist during their rescheduled U.S. shows, occasionally lending an acoustic set or opening with The Get Ready as support to Lynyrd Skynyrd.

About Joe Vitale
Joe Vitale has toured and recorded with Hall of Fame artists The Eagles, Joe Walsh, Crosby, Stills and Nash, Neil Young, Peter Frampton, Dan Fogelberg and Ted Nugent, just to name a few. He has recorded with Ringo Starr, John Lennon, Bill Wyman, John Entwistle, Zakk Wylde, Keith Richards, Rick Derringer and many more. Joe Vitale has over 50 gold and platinum albums that he has performed on. In 2011, Joe Vitale played drums for the historic Buffalo Springfield reunion tour. His drumming encompasses all styles of music and his songwriting includes co-writing and recording Joe Walsh's classic "Rocky Mountain Way" (recently awarded 5 million plays from BMI) and from The Eagles Hotel California album, "Pretty Maids All in a Row." He's also written songs for Crosby, Stills, Nash and Young. He continues to tour, record and write and has no plans of retirement !!!