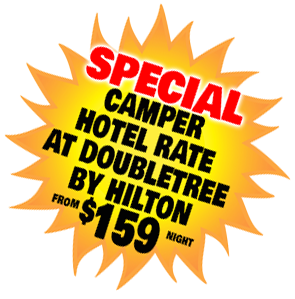 
It was over 30 years ago that Dave Mustaine founded Megadeth, in the process pioneering the sound that would become known the world over as thrash metal. And from the very beginning, the band proved to be the most lethal and audacious unit on the heavy music scene, pushing thrash to the limits of musical ferocity and instrumental virtuosity on early efforts like their 1985 debut, Killing Is My Business...And Business Is Good! and 1986's seminal Peace Sells...But Who's Buying?.

In the decades since, Megadeth have taken their place as one of metal's most influential and respected acts---not to mention among its most successful: Over the course of their career, the band have sold 38 million albums, notched six consecutive platinum efforts---including 1992's two-million-selling Countdown to Extinction---and garnered 11 Grammy nominations. And onstage they continue to be a world-dominating metal force, shaking stadiums from the U.S. to Bulgaria as a key component of the recent milestone Big 4 concerts, as well as playing their own shows to massive crowds in every corner of the globe.


For close to 30 years Nicko McBrain has been behind the drum kit for British heavy metal pioneers Iron Maiden. After seeing jazz stalwarts The Dave Brubeck Quartet on TV a young Nicko was captivated by their drummer Joe Morello and soon after asked his parents for a drum kit. He got his wish at age 13 and never looked back. Through his teens he played in various pub bands and rock outfits eventually landing a spot playing with The Pat Travers Band and later the rock group: Trust. When Trust secured an opening slot on Iron Maiden’s “The Beast On The Road” tour, Nicko met Maiden and became their drummer soon after.

His powerhouse playing can be heard on the legendary Maiden albums: Piece Of Mind, Powerslave, Somewhere In Time, Seventh Son Of A Seventh Son, No Prayer For The Dying, Fear Of The Dark, The X Factor, Virtual XI, Brave New World, Dance Of Death, A Matter Of Life And Death, The Final Frontier, The Book Of Souls. As well as various live albums and compilations.

His style and attitude has inspired generations of heavy-metal drummers that followed.


In 2011, Judas Priest enlisted Richie Faulkner on guitar. The move seemed to have reinvigorated the band, as evidenced by a show-stealing performance on the 'American Idol' TV program, that also served as Faulkner's debut performance with the band and the 'Epitaph' concert DVD in 2013. Priest’s next studio effort would arrive in 2014, ‘Redeemer of Souls’, which resulted in the highest chart placement of Priest’s entire career in the U.S. when it scaled the charts to #6 and was supported by another strong tour. This also was Faulkner's debut to writing with Glenn Tipton and Rob Halford and he fast became a permanent part of the writing team. 2019 saw the band continue their touring onslaught which leads us nicely to 2021 when the world will celebrate this remarkable band's' 50 YEARS OF HEAVY METAL!!


Steve Morse is a guitarist renowned for his intricate compositions, innovative techniques, and versatility across musical genres. He attended University of Miami’s School of Music, where he studied classical guitar and jazz. A “guitarist’s guitarist”, he was voted “Best Overall Guitarist” in the Guitar Player magazine Readers Poll for five consecutive years, before being removed from eligibility to open the award to other musicians, and being inducted into their Gallery of Greats. His work has received seven Grammy award nominations, and he has appeared on over 200 albums. Steve has established himself in a wide range of musical genres, from classical guitar to jazz and fusion to country and bluegrass to progressive rock, pop rock and hard rock, beginning with bands such as the Dixie Dregs, the Steve Morse Band and Kansas. In 1994, Steve joined Rock & Roll Hall of Famers Deep Purple, and is the band’s longest-serving guitarist. In 2011, Steve became a member of the newly formed progressive pop/rock supergroup Flying Colors.


Producer Tony Bongiovi has worked with some of rock's biggest names – touching upon a variety of genres in the process (heavy metal, punk, new wave, disco, soul, arena rock, etc.), and even inadvertently helped the career of his second cousin, Jon Bon Jovi. Bongiovi got his start in the early ‘70s, when he engineered recordings for Millie Jackson. Bongiovi also founded one of New York's best known recording studios, the Power Station (now called Avatar Studios), as he turned his attention to producing acts by the later part of the decade. Bongiovi worked mostly with heavy metal/hard rock acts during the early to mid ‘80s – including Aerosmith, Helix, Meat Loaf, Ozzy Osbourne, and the self-titled debuts by Aldo Nova and even Bon Jovi. By the 21st century, Bongiovi had launched his own management company, Bongiovi Entertainment Inc.

The Recording Package includes a full day session at a Professional Recording Studio with a Professional Producer. An extra bonus included in the Recording Package is special guest Tony Bongiovi! Over the years, producer Tony Bongiovi has worked with some of rock's biggest names – touching upon a variety of genres in the process (heavy metal, punk, new wave, disco, soul, arena rock, etc.), and even inadvertently helped the career of his second cousin, Jon Bon Jovi. Bongiovi got his start in the early ‘70s, when he engineered recordings for Millie Jackson. Bongiovi also founded one of New York's best known recording studios, the Power Station (now called Avatar Studios), as he turned his attention to producing acts by the later part of the decade. Bongiovi worked mostly with heavy metal/hard rock acts during the early to mid ‘80s – including Aerosmith, Helix, Meat Loaf, Ozzy Osbourne, and the self-titled debuts by Aldo Nova and even Bon Jovi. By the 21st century, Bongiovi had launched his own management company, Bongiovi Entertainment Inc.

We will be offering many masterclasses by our Rock Star mentors a few months in advance on ZOOM that you can register for and attend that will give lessons on the music of the guest stars. These classes will be hosted by Britt Lightning, our Rock Camp Head Counselor and the rockstar mentors. These classes will be between 60-90 minutes and you will be able to talk live to the rockers . Britt has hosted over 160 masterclasses this past year. The cost for these will be $50 and you will be sent a list of the schedule. In addition you and your band will be able to Zoom with your rock star mentor 7-10 days in advance to discuss the songs you want to focus on to play with the guest star and songs for your live performance and maybe introduce some new songs.