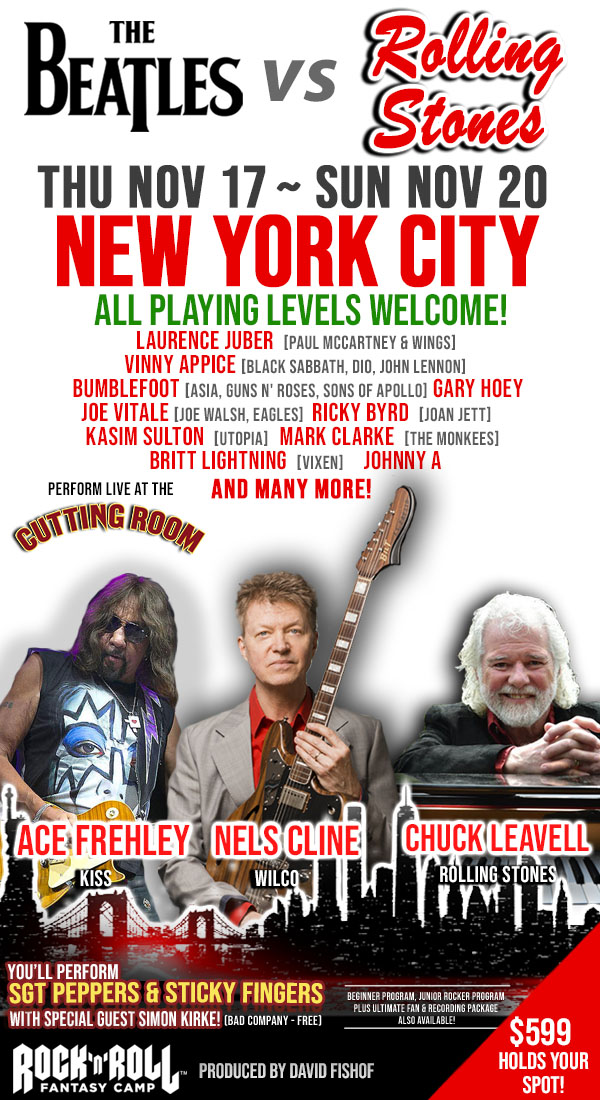 ROCK 'N' ROLL FANTASY CAMP IS PROUD AND HONORED TO PRESENT ACE FREHLEY, NELS CLINE, CHUCK LEAVELL, LAURENCE JUBER, SIMON KIRKE AND MORE SURPRISE GUESTS! Our BEATLES VS STONES Fantasy Camp is a camp for musicians to take their skills and confidence to the next level, realize their dreams are possible, and create bonds and friendships for life with fellow aspiring musicians. Playing with our counselors and guest star musicians over four days will make YOU a better musician! At this camp, you will select the band you want to join, jam hits from both the Rolling Stones, The Beatles, WILCO, FREE, BAD COMPANY and more - and prove YOUR favorite is the better band at our final night’s showdown at THE CUTTING ROOM! Your choice in band does not preclude you from playing songs from the opposing band! You will want to play at least one song from each band. At your final performance, the collective camp bands will perform the entire Sgt Pepper’s Lonely Hearts Club Band and Sticky Fingers albums, and more . Bring your grooviest outfits!

THE CUTTING ROOM
At its new location on East 32nd Street between Park and Madison, The Cutting Room builds on a decade of history that includes some of today's top performers - John Mayer, Lady Gaga, Sting, Sheryl Crow and David Bowie are just some of the artists that have graced the stage of the Cutting Room at its previous location. The Cutting Room continues the tradition of extraordinary performances and special moments, with a fresh new take on what a rock club & lounge should feel like.

“Thanks to recent remarks by Paul McCartney in the New Yorker, maybe we now can all finally agree that a rivalry between the Beatles and the Rolling Stones was — and is! — a real thing, as opposed to just a fan construct. … Was McCartney joking when he described the Stones as “a blues cover band” and added that “our net was cast a bit wider than theirs”? No — he was asked an honest question, and responded with honest pride… as both collective parties have from the late 1960s forward. Jagger was speaking purely in jest when he fired back at a Stones show last week by joshing that McCartney was backstage at the L.A. show and would be “joining us in a blues cover.” But the Stones have given as well as they’ve gotten over the years. There’ve also been countless personal encounters that seemed friendly, and fireworks-free — Jagger inducted the Beatles into the Rock and Roll Hall of Fame, for Pete Best’s sake — but the edge between them has never completely dulled.” – Chris Willman, Variety, October 2021


Known as the "Celestial One", "Mr. Excitement" or simply to the legions of KISS fans as the Spaceman, Ace Frehley with his impressive lead guitar riffs and stinging vibrato has been a major influence on rock guitar for over two decades. On January 17, 1973, Ace went to a loft on 10 E. 23rd. St. near Fifth Avenue in Manhattan, New York City where Paul Stanley, Peter Criss, and Gene Simmons were auditioning for guitarists to finish creating their ultimate band. He was answering an advertisement for a guitarist in the magazine "The Village Voice" which said, "Guitarist wanted with flash and balls. " He walks into the audition with an orange sneaker and a red sneaker, and a week later, he was in the band, which later named itself: KISS. Check out Ace's recent album, Anomaly.

About NELS CLINE:
Guitar explorer Nels Cline is best known these days as the lead guitarist in the band Wilco. His recording and performing career — spanning jazz, rock, punk and experimental — is well into its fourth decade, with over 200 recordings, including at least 30 for which he is leader. Cline has received many accolades including Rolling Stone anointing him as both one of 20 "new guitar gods" and one of the top 100 guitarists of all time.
Beyond Wilco, Cline performs in a duo project with guitarist Julian Lage in addition to a quartet, The Nels Cline 4 (featuring Lage plus bassist Jorge Roeder and drummer Tom Rainey), collaborates with his partner Yuka Honda as the duo CUP, performs as Stretch Woven with percussionist Scott Amendola, leads The Nels Cline Singers (featuring Amendola plus bassist Trevor Dunn and percussionist Cyro Baptista) and plays with Stained Radiance (an improvisational live project with performance painter Norton Wisdom). Cline also periodically presents concerts of his concept album Lovers, which involves a 17-person ensemble and collaborates dozens of composers/improvisers.

About SIMON KIRKE:
Drummer Simon Kirke kept the beat for two of the 70's most popular bluesy hard rockers -- Free and Bad Company. With the combined successes of Free and Band Company, you can turn on any rock station in the world and you are likely to hear Simon's drumming. As well as being a well respected drummer, Simon is an accomplished songwriter and producer. He co-wrote the song "Bad Company" with Paul Rodgers and wrote "Anna" and "Weep No More" for the Straight Shooter album

About Chuck Leavell:
Chuck Leavell’s keyboard work has been heard on the works of Eric Clapton, the Rolling Stones, George Harrison, The Allman Brothers Band, The Black Crowes, Blues Traveler, Train, Martina McBride, John Mayer, David Gilmour and many other prominent artists. His association with the Stones began back in 1982 and is still going strong, having recently toured with the Stones on their No Filter tours of Europe and the US. He is heard on their most recent grammy-winning record, Blue and Lonesome, and has served as Musical Director for the Stones for more than 20 years.

GET TICKETS TO THE FINAL NIGHT PERFORMANCE
CLICK HERE

The Recording Package includes a full day session at a Professional Recording Studio, with a Professional Producer. An extra bonus included in the Recording Package is special guest, Jack Douglas! Jack Douglas is an American record producer. He is known for his work with John Lennon and Yoko Ono, Patti Smith, Cheap Trick, and New York Dolls, among other rock artists in the 1970s and 1980s, notably producing three successful albums for Aerosmith. 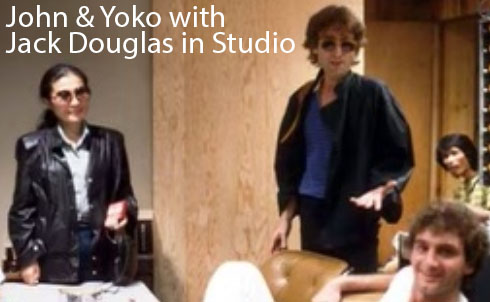 We will be offering several masterclasses by our many Rock Star mentors a few months in advance on ZOOM that you can register for and attend that will give lessons on the music of the guest stars. These classes will be hosted by Britt Lightning, our Rock Camp Head Counselor and the rockstar mentors. These classes will be between 60-90 minutes and you will be able to talk live to the rockers . Britt has hosted over 160 masterclasses this past year. The cost for these will be $50 and you will be sent a list of the schedule. In addition you and your band will be able to Zoom with your rock star mentor 7-10 days in advance to discuss the songs you want to focus on to play with the guest star and songs for your live performance and maybe introduce some new songs.

DON’T MISS OUT on this ONCE IN A LIFETIME EXPERIENCE – THIS WILL SELLOUT! Contact ROCK CAMP SALES DEPT. NOW to reserve your spot at (888) 762- 2263, or [email protected]

The Jr Rockers Program is customized for ages 12-16.This program is for parents who want their children to mentored by the top musicians*. This is the perfect program for your up-and-coming rock star. Their rock star counselor will mentor your child throughout Camp, as they encourage them in developing their musical skills, live performance skills, working in a band environment, and so much more. They will participate in master classes, jam rooms, and counselor jams - Limited spots available.