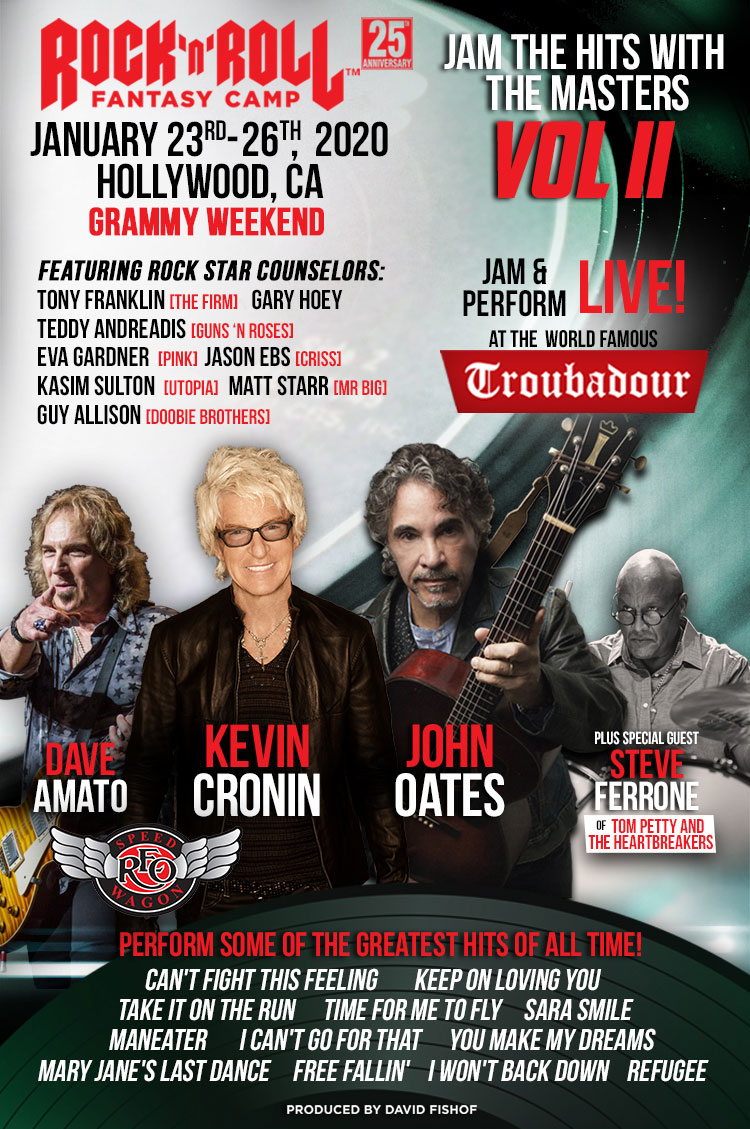 Imagine - YOU...On stage...Jamming with the band members, performers, and songwriters of some of the greatest Rock and Roll songs of the last 40 years. This is a once in a lifetime opportunity to jam, practice, rehearse and perform with members of some of the greatest rock bands on this planet. Get ready to hit the stage and perform some of the most iconic rock anthems with Kevin Cronin and Dave Amato of REO SPEEDWAGON, John Oates of HALL & OATES and Steve Ferrone from TOM PETTY AND THE HEARTBREAKERS! PLUS PERFORM LIVE WITH JOHN OATES AT THE LEGENDARY TROUBADOUR IN HOLLYWOOD!

“I met David Fishof in New York, and visited one of his early Fantasy Camps. I felt the joy of the campers, all getting a chance to experience a little slice of their dream come true. Last year Dave and I participated, and felt so rewarded that we are back again…and this time with the great John Oates. This is for musicians of all ages and skill levels. It’s big fun for everyone. See you in LA" Kevin Cronin

Celebrate Grammy weekend 2020 with these Grammy winning and Grammy nominated artists, as you perform alongside these arena headliners on some of their greatest hits!

Along with performing with these amazing artists, you will have the chance to ask the questions you’ve always wanted to ask. Both Kevin Cronin and John Oates have a huge passion for songwriting and sharing their songwriting techniques! This camp will feature both of these artists discussing their approach to songwriting, where they get their ideas from and answering all your songwriting questions! If you are a songwriter, this is a camp you don’t want to miss…here is your chance to learn from some of the greatest and most successful songwriters of the 70’s and 80’s, who songs have been huge radio hits and become rock anthems and stood the test of time!

Plus perform live with your camper band AND JOHN OATES at the legendary Troubadour in Hollywood California-the same venue where Hall & Oates recorded their critically acclaimed LIVE AT THE TROUBADOUR when they returned to this iconic club 35 years after performing there as an opening act, and Tom Petty and The Heartbreakers made a surprise appearance at Mike Campbell’s Merry Minstrel Musical Circus in 2015 and performed an unexpected 10 song set!

This is NOT a competition, It's not a reality show. It's simply "reality". It's YOU... face to face, with the rock stars that have created the sound track of your life...and YOU get to play with THEM!

Get out your records, CDs and tabs and start practicing the hits you'll be playing live on stage with your rock star counselors guiding you every step of the way.

This is not a competition. All skill levels are respected and welcome.

Formed in 1967, REO Speedwagon cultivated a following during the 1970s and achieved significant commercial success throughout the 1980s. Hi Infidelity (1980) contained four US Top 40 hits and is the group's best-selling album, with over 10 million copies sold.

Over the course of its career, the band has sold more than 40 million records and has charted 13 Top 40 hits, including the number ones "Keep On Loving You" and "Can't Fight This Feeling". 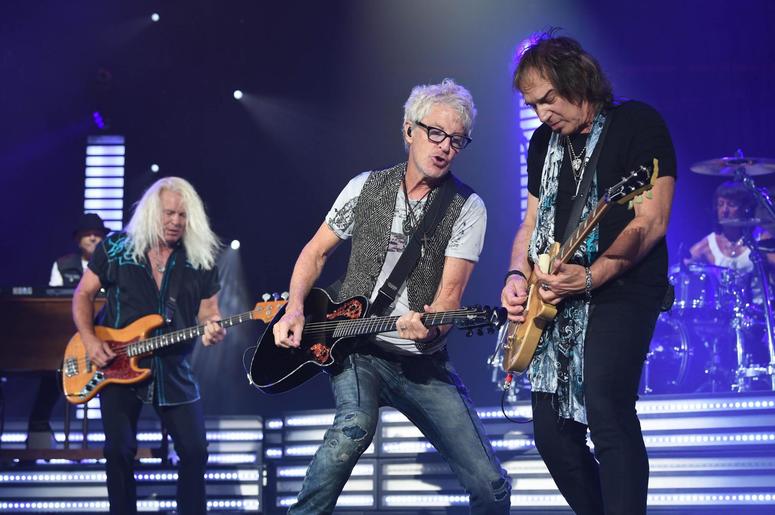 Daryl Hall and John Oates, often referred to as Hall & Oates, have sold an estimated 40 million records, making them the best-selling music duo in history. They are best known for their six No. 1 hits on the Billboard Hot 100: "Rich Girl", "Kiss on My List", "Private Eyes", "I Can't Go for That (No Can Do)", "Maneater", and "Out of Touch", as well as many other songs which charted in the Top 40 including the single "You Make My Dreams". In total, they had 34 chart hits on the US Billboard Hot 100, seven RIAA platinum albums, and six RIAA gold albums. In 2003, Hall and Oates were inducted into the Songwriters Hall of Fame. They were inducted into the Rock and Roll Hall of Fame in April 2014. On September 2, 2016, they received a star on the Hollywood Walk of Fame. 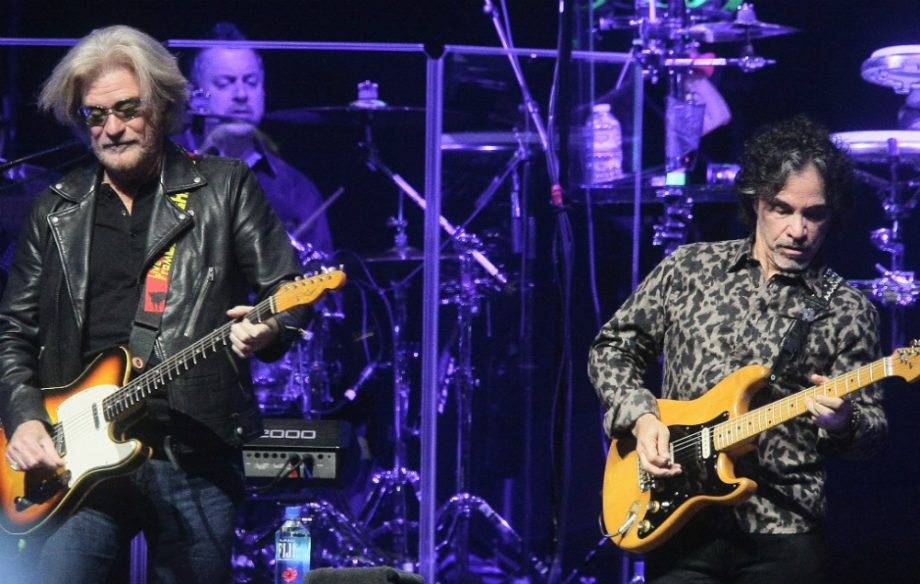 Tom Petty notched 22 entries on the Billboard 200 and dozens of hits on Billboard’s rock and pop charts. Petty scored a record 28 top 10 hits on the Mainstream Rock Songs airplay chart, more than any other act in the chart’s 36-year history. 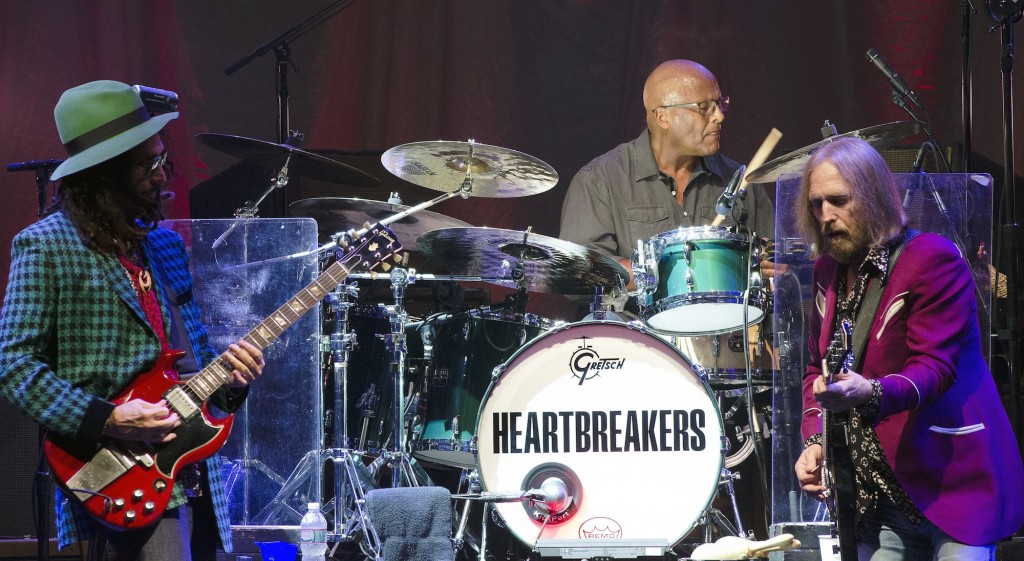 Attend the greatest master classes given by these band members and Q and A's where you can interact with these rock stars and learn all the inside and never before revealed stories on their iconic albums.

This camp, filled with these legendary artists along with our rock star counselors, will be a once in a lifetime opportunity for you to immerse yourself into rock and roll for four music filled days.

Don't get left out!

SIGN UP NOW AS WE WELCOME MUSICIANS OF ALL LEVELS IN OUR NONCOMPETITIVE ENVIRONMENT.

There will be Q&A’s with our headliner and rock star counselors, parties, catering, your road crew and so much more! In the upcoming days you will jam live on-stage with Kevin Cronin and Dave Amato from REO Speedwagon, John Oates from Hall & Oates and Steve Ferrone from Tom Petty & The Heartbreakers, take photos, and your memorabilia signed by them as well. Plus, your band will perform live at the legendary Troubadour in Hollywood, CA!

Get Tickets to the Troubador Show!

The Recording Package includes a full day session at a Professional Recording Studio with a Professional Producer. An extra bonus included in the Recording Package is special guest Ron Nevison! Multi-platinum record producer Ron Nevison, throughout his career, has operated much like a surgeon, brought in during a critical point in a band's career to bring them back to the top from the commercial brink. Whether kick-starting a stalled hit maker like Jefferson Airplane back into flight as Jefferson Starship, or breathing fresh air back into an outdated band's sound- such as was the case with Heart and Chicago, via seminal 1980s Billboard # 1 ballads like These Dreams and Look Away respectively, Nevison has rarely had a patient- metaphorically speaking- that he couldn't heal with his multi-platinum production touch. Ron Nevison's career highlights include many of the record industry's highest distinctions, including his being recognized as Billboard Magazine's Top-5 Producer of the Year 4 separate times, garnering countless Grammy-nominated and winning hit records/albums, and producing well over 100 Million Albums sold in the course of his almost 4-decade career. With the pop rock-genre he helped to invent alive as ever almost two decades into the millennium.

Our Headline package is where you will spend 4 days living your dream, while you rehearse, jam and perform with Kevin Cronin and Dave Amato of REO SPEEDWAGON, John Oates of HALL & OATES and Steve Ferrone from TOM PETTY AND THE HEARTBREAKERS! in HOLLYWOOD, CA along with our incredible rock star counselors!

Our amazing Recording package addition is where you will spend a full day in, the studio with your band and legendary producer. You and your band will fully experience what it's like to go into the studio and record with producer Ron Nevison, who will capture your skills in pristine digital audio format that you can share with all your friends and family...