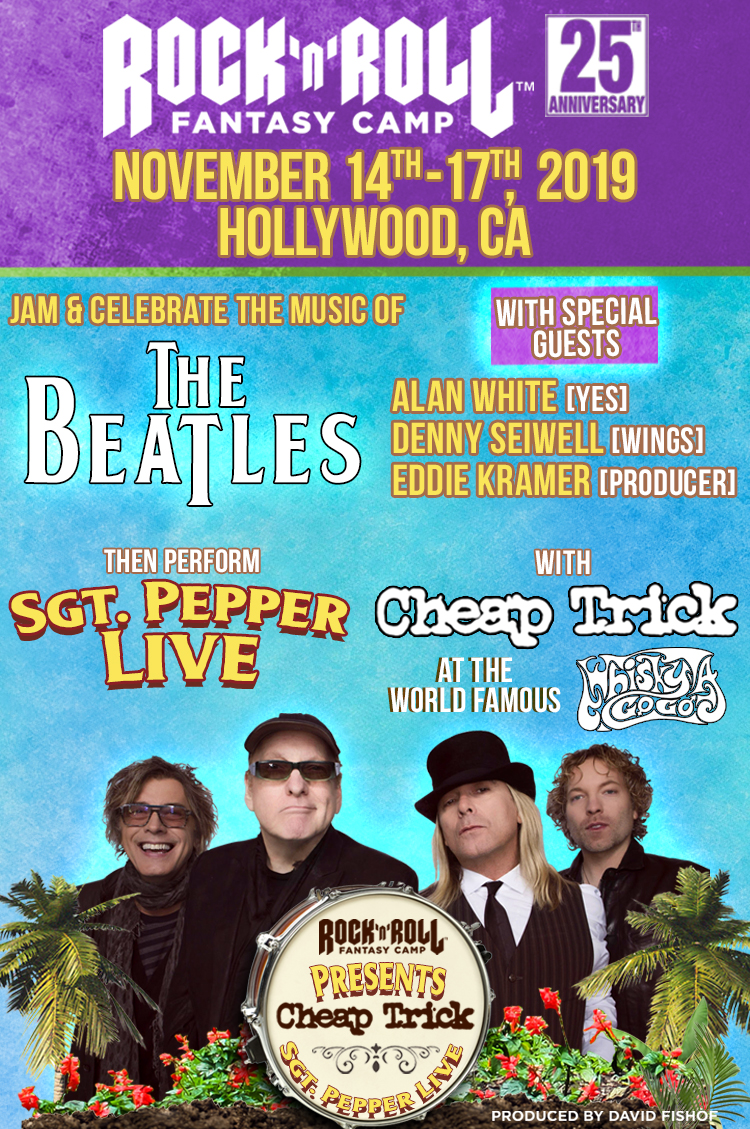 You on stage with Robin Zander, Tom Petersson, Rick Nielsen and Daxx Nielsen, the members of Cheap Trick and an orchestra performing Sgt. Pepper Live at the legendary Whisky A Go Go.

This is a once-in-a-Lifetime, incredibly transformative and truly life-altering Rock and Roll Fantasy Camp for Beatles Fans!

Imagine being part of a star-studded musical tribute to the record Rolling Stone magazine ranked as the Greatest Album of All Time.

This special Rock Camp dedicated to the timeless music of the Beatles takes place in Hollywood, California on November 14-17, 2019.

Your Rock Camp Counselors Have Histories with the Beatles!

Play Beatles songs while being mentored by some incredible musicians who actually played with members of the Fab Four: Laurence Juber, Denny Seiwell, Alan White, as well as other Beatles collaborators and renowned rock stars.

Every Moment of the Beatles Rock Camp Will Be Life Changing!

BONUS! Be a Part of the 10th Anniversary of Cheap Trick’s Sgt. Pepper Live!

In 2007, Arvind Manocha—who was the General Manager of the Hollywood Bowl at the time—wanted to celebrate the 40th anniversary of the release of Sgt. Pepper’s Lonely Hearts Club Band by convincing Cheap Trick to perform the album live with the Hollywood Bowl Orchestra.

It turned out to be a truly magnificent idea.

The Hollywood Bowl concert sold out two nights, leading to Cheap Trick’s two-week, sold-out residency at the Las Vegas Hilton, as well as engagements in other major cities.

On November 17, YOU can stand onstage with Cheap Trick and not only pay tribute to the Beatles masterwork, but also observe the ten-year anniversary of Cheap Trick’s rockin’ orchestral celebration of Sgt. Pepper’s Lonely Hearts Club Band.

There won’t be a dry eye in the house when the first notes of “Sgt. Pepper’s Lonely Hearts Club Band” echo off the walls of the Whisky a Go Go.

This is an experience you will never ever forget!

Don’t be a dreamer. LIVE your dream!

Simply fill out our questionnaire and we will place you accordingly: in a band with other like-minded, similarly skilled fantasy campers all ready to rock. Whatever your level of proficiency, you’ll find your abilities and confidence grow as you rehearse under the constant guidance of one of our amazing rock star counselors….

These phenomenal mentors won’t simply coordinate your band, they’ll inspire you in a series of intimate master classes. Here you will spend quality time focused on perfecting your skills, immersed in lessons specific to your instrument. That way you’ll be at your personal best by the time you perform Sgt. Pepper Live with CHEAP TRICK, and your jams with Beatles collaborators DENNY SEIWELL (WINGS), ALAN WHITE (John Lennon and The Plastic Ono band, George Harrison, Yes) and comfortable enough to chill out with the guys, take a few photos and get your memorabilia signed afterward.

The Recording Package includes a full day session at a Professional Recording Studio with a Professional Producer. An extra bonus included in the Recording Package is special guest Eddie Kramer! Eddie Kramer is a legendary Producer who has been behind the boards for the biggest names in music - The Rolling Stones, Peter Frampton, Joe Cocker, Johnny Winter, David Bowie, The Beatles and Bad Company, just to name a few. But he is perhaps best known for three long-term associations in which he not only helped create some of the most important music of the rock era, but also set standards for rock production that set him aside as a true innovator. His work with Jimi Hendrix, Led Zeppelin and Kiss produced music which continues to influence rock musicians and producers today.

Our Headline package is where you will spend 4 days living your dream, while you rehearse, jam and perform with ALAN WHITE FROM YES, DENNY SEIWELL FROM WINGS, AND PRODUCER EDDIE KRAMER IN HOLLYWOOD, CA along with our incredible rock star counselors!

Our amazing Recording package addition is where you will spend a full day in, the studio with your band and legendary producer, Eddie Kramer. You and your band will fully experience what it's like to go into the studio and record with producer Eddie Kramer, who will capture your skills in pristine digital audio format that you can share with all your friends and family...

We have the Jr Rockers Program for ages 10-16. This is the perfect program for your up and coming rock star. Their rock star counselor will mentor your child throughout camp, as they encourage them in developing their musical skills, live performance skills, working in a band environment, and so much more. They will participate in master classes, jam rooms, and counselor jams - Limited spots available