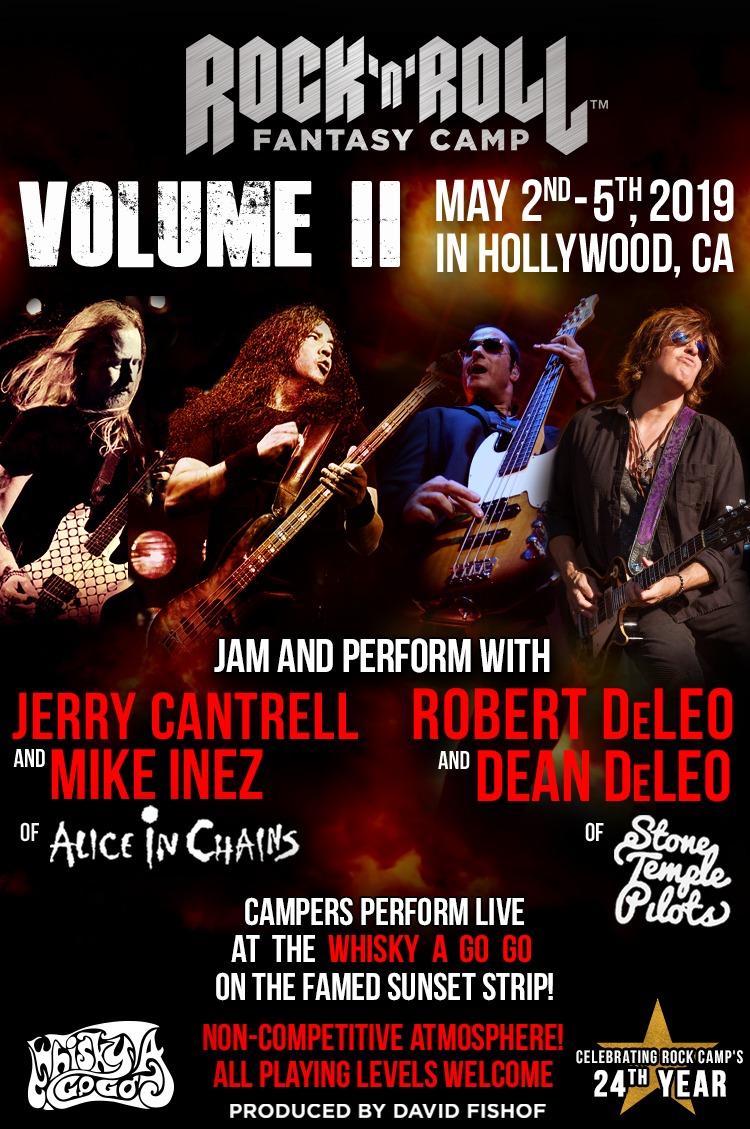 Rock and Roll Fantasy Camp is excited to welcome back JERRY CANTRELL & MIKE INEZ of ALICE IN CHAINS and DEAN & ROBERT DeLEO of STONE TEMPLE PILOTS!

The last time these incredible musicians participated in camp was such an amazing experience, we are bringing them back for Volume II!

The hard rock architects of contemporary classics like “Rooster,” “Would?” and “Man in the Box,” Alice In Chains have sold more than 14 million albums in the United States (nearly 35 million worldwide!) released two number-one albums, had 21 Top-40 singles, and has received an astounding NINE Grammy nominations including a BEST ROCK ALBUM nomination this year for RANIER FOG!

A perfect blend of hard rock, power pop and elegant groove, Stone Temple Pilots is one of the most commercially successful rock bands of the past three decades, selling nearly 40 million records worldwide. The band has had 16 Top-Ten singles on the Billboard rock charts—eight of which peaked at No. 1! —and one No. 1 album for Purple in 1994. That same year, the band won a Grammy for "Best Hard Rock Performance" for the song "Plush" from the album Core.

Make no mistake, this will be a monumental camp filled with some of the greatest musicians and music from the 90’s to the present day. Come celebrate the experience with us and celebrate the legacy of these incredibly influential and inspiring artists as you live out YOUR rock and roll fantasy by performing with them!

Simply fill out our questionnaire and we will place you accordingly: in a band with other like-minded, similarly skilled fantasy campers all ready to rock. Whatever your level of proficiency, you’ll find your abilities and confidence grow as you rehearse under the constant guidance of one of our amazing rock star counselors….

These phenomenal mentors won’t simply coordinate your band, they’ll inspire you in a series of intimate master classes. Here you will spend quality time focused on perfecting your skills, immersed in lessons specific to your instrument. That way you’ll be at your personal best by the time you perform live on stage with JERRY CANTRELL & MIKE INEZ and DEAN & ROBERT DeLEO, and comfortable enough to chill out with the guys, take a few photos and get your memorabilia signed afterward.

What past campers had to say:

"The guys from AIC and STP were awesome!. All of them were so down to earth and nice. They were so interested in me and how I doing I thought I was the rockstar." Jason B

"They were so generous with their time, music and interaction with all who were at the camp. I was able to tell them what they meant musically and artistically to me! " Paula B

"They say never meet your heroes but Jerry and Mike were fantastic. Laid back and approachable. The reason I started music" Rich C

"Thank you for being there and making a lot of dreams and goals come true!" Joe F

"Such a wonderful experience to be able to jam with the musicians who wrote the songs. It was something I will never forget. Loved hearing your Q & A as well. Thank you for taking time out of your busy schedule, and for making us feel like rock stars!" Tod F

Our Headline package is where you will spend 4 days living your dream, while you rehearse, jam and perform with Jerry Cantrell & Mike Inez of Alice In Chains and Dean & Robert DeLeo of Stone Temple Pilots along with our incredible rock star counselors!

Our amazing Recording package addition is where you will spend a full day in a professional recording studio with your band and a legendary rock 'n' roll record producer. You and your band will fully experience what it's like to go into the studio and record with a producer who will capture your skills in pristine digital audio format that you can share with all your friends and family... You will arrive at the incredible CLEAR LAKE RECORDING STUDIO recording studio in the morning, where your producer, Bob Marlette, and gear will be all set up and ready for you. You and your band will learn the ins and outs of recording a song, how things work in the recording studio and see what it's like to work with a world-renowned record producer.

We have the Jr Rockers Program for ages 10-16. This is the perfect program for your up and coming rock star. Their rock star counselor will mentor your child throughout camp, as they encourage them in developing their musical skills, live performance skills, working in a band environment, and so much more. They will participate in master classes, jam rooms, counselor jams and perform two live shows at Hollywood's coolest nightspots.-Limited spots available

STAY IN THE LOOP
ON ALL THINGS ROCK CAMP

Sign up for our email list and receive special discounts, promotions and all the latest Rock and Roll Fantasy camp news directly to your inbox